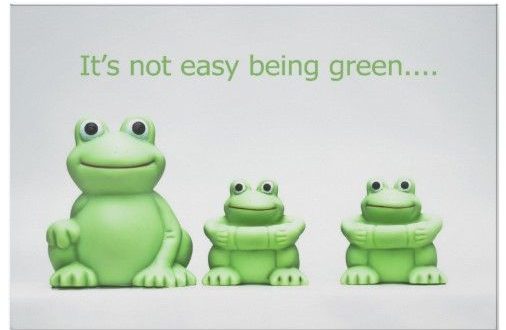 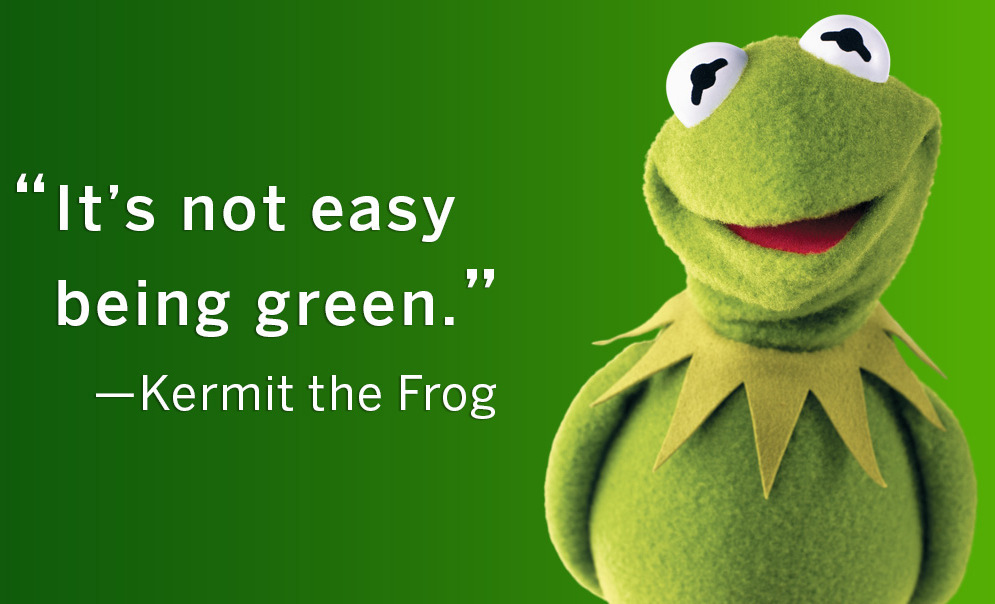 Building departments throughout the state are struggling with CalGreen. There are several reasons for this.

One aspect is the lack of funding for support staff and training in the building departments. The Building Standards Commission (BSC) initially produced a permit level fee for this. In addition, the BSC continues to provide training to many local jurisdictions. Unfortunately, these efforts have fallen far short.

The California Green Buildings Standard Code (aka “CalGreen”) suffers from a lack of enforcement. Consequently, the state-wide 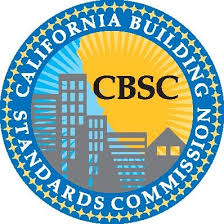 compliance with the code is abysmal. As with any code or law, a lack of enforcement leads to a lack of compliance.

To be fair, the Building Standards Commission faces its own challenges. The BSC is staffed by only fourteen people. These include the Executive Director, Deputy Executive Director, six technical staff and the administrative staff. They have only one licensed architect.

The lack of staffing is not limited to the BSC. Every building department in California is under-staffed. This is due, in part, to the low priority that is placed on these departments within the current political climate. 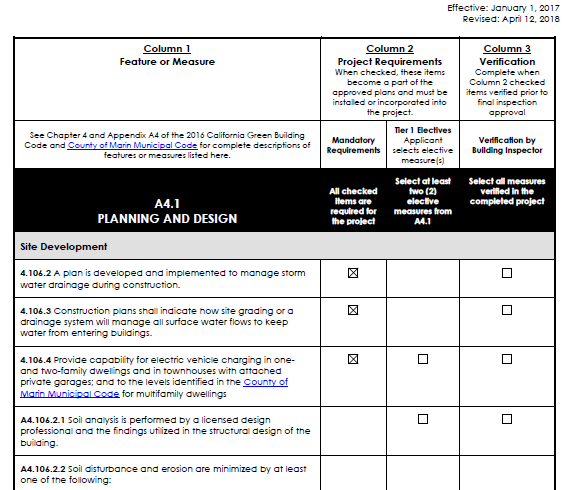 Marin’s Checklist with “A” numbering, and non-A numbering

The format of the code is another problem. One of the most confusing aspects is that different sections have nearly identical paragraph numbering. This occurs between the mandatory measures and the poorly named “voluntary measures”.

For example, there are two separate code paragraphs numbered 4.303 and many, many other examples. The only difference is that the voluntary measures have an “A” in front of them. This might have worked if the two sets of numbering were always separated, but they are not. Every checklist has the mandatory and voluntary measures mixed together. This leads to frequent misinterpretations for those who deal with checklists on a daily basis.

This poorly named “voluntary measures” are never voluntary for the people the code is written for – the building designers and builders. The Tier requirements are only “voluntary” for the building department to adopt, or not adopt. If adopted, they are mandatory for your project. The term “voluntary” is misleading and unnecessary and should simply be deleted from the code. Just call them “the Tiers” and be done with it.

Perhaps the most frustrating aspect of the code is the lack of clarity on the means of compliance. A good example of this is the construction waste management requirements. The mandatory measures for residential buildings requires recycling of a minimum of 65 percent of the construction waste. While this may be feasible on large commercial projects, its nearly impossible for a single family home contractor. Local waste management companies are not going to sort the waste for such a small project. Smaller commercial projects have the same problem.

Another example is the documentation for VOC containing materials that actually requires “chain of custody certifications”. How can a residential contractor maintain chain of custody records for every tube of sealant, aerosol spray or carpet cushion (plus many more) on a project?

The Tiers present another level of confusion by requiring prerequisites and then elective measures. Typically two or three elective measures are offered. In many cases the limited electives are not feasible. This leaves the designer/builder in a code no-mans land.

Where Did the BSC Go Wrong?

The fundamental problem is a result of attempting to fit a voluntary LEED (Leadership in Energy and Environmental Design) process into an enforceable law. The BSC used the LEED program as a starting point for development of the Green Building Standards Code.

The flaw in this adaptation is that LEED is strictly voluntary. These projects begin with LEED budgets and buy-in from all parties. If one LEED point can’t be achieved, the team has an option to drop that requirement. They pick and choose the requirements they want to comply with.

An architect designing a single family home has no such leeway when it comes to CalGreen. You must comply to be in conformance with the code. The problem is many of the CalGreen code requirements do not have reasonable or clear paths to compliance!

The concept of following a LEED type process was no doubt appealing at the time. The well documented LEED format would simplify the development of the first Green Building Code. The disconnect is that the LEED process is flexible, while code requirements are not. 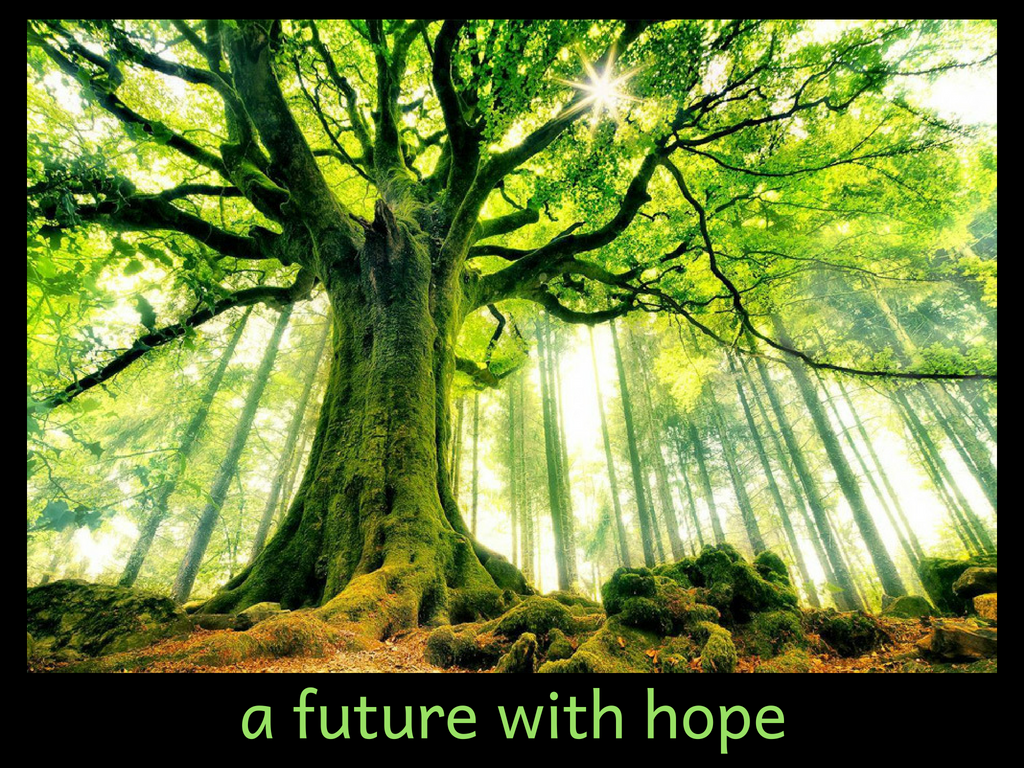 Hope for the Future

For example, along the coastal range including Monterey, Aptos and Santa Cruz jurisdictions are very competitive. They are striving to advance the CalGreen Code as much as possible. Another example is Davis California. They not only require a higher level of green code compliance, but they are actively involved in the code adoption process.

Statewide, approximately 540 jurisdictions have adopted the CalGreen Code. As time passes it is hoped that the CalGreen Code will reach its potential. In the meantime, building departments will continue to struggle with CalGreen.

At CalGreen Energy Services we are specialists in CalGreen consulting and permitting. CalGreen is our only business.

To learn more about the Building Standards Commission visit here:

For more information on our CalGreen Checklist services, please follow the link: